The Footcare Clinic has the privilege of meeting local heroes every day!  Despite these heroes not having celebrity status or high-end sponsorship deals, we believe they are inspirational. Their stories will motivate you to challenge yourself, get outside your own comfort zone, and achieve your own goals no matter how big or small.  Here is Dave’s story …..

I started running back in my Uni days, it was haphazard and never with any sort of plan. In my early 20’s I joined a volunteer mountain rescue team. I started to run more often for fitness. I’d run a 10km circuit, never timed it… this was pre-GPS watches. I knew it took me around an hour to complete but it was more about just getting out to run and keep fit. Eventually, I started to run the trails and I was hooked.

In 2013 I relocated from Ireland to Australia and made a decision to run more often. Over the next year or so I ran my first long trail race and joined a local running club, Mordialloc Social Running Club. Joining the club changed my whole perspective on running. I started to run more often and in turn, met some amazing people. I had never thought of running a marathon but after a few months I got sucked in with the enthusiasm of the club members and soon enough I had a plan to run the 2016 Melbourne marathon. Longer runs now had to happen, learning about hydration, nutrition, and not going out too fast. I ran a lot of my longer runs on my own at first. Early Saturday mornings in winter and knocking out a 30km run… it was hard work… but I loved it! I joined up with some other club members who were also training for the marathon. It just seemed easier when running with others. You could bounce ideas off each other or just chat for the longer runs.

Training for marathons led me to run lots of different types of events, including Run for the Kids, Sandypoint half marathon, Puffing Billy Run, Run Melbourne, Two Bays Trail Run and so on. I started to mix my road running with trail running. The distances also started to increase; marathons were no longer long enough… Ultramarathons were now on the horizon… (an ultramarathon is anything longer than your standard marathon of 42.2kms). In 2017 I ran my first ultramarathon, Marysville 50km… it was a tough day on the trails, very hot and a lot of big hills… but I loved it. In 2019 after months and months of training which included marathons and ultramarathons. I ran my first 100km ultramarathon, which in turn was actually 107km… but what’s a few extra km’s when it comes to trail running!

Running a marathon is not easy. It takes a lot of training and preparation. So many early morning long runs. You learn how to pace yourself. What you can and cannot eat or drink… there’s only one way to find this out and that is by experimentation. Nutrition is so important, energy gels, chews, salt tabs, and believe it over not Coca-Cola! Then there’s the right gear and shoes. I learned so much from the people I ran with. No question was a silly one we all learned from each other and help each other along the way.

Whilst we only see the pretty pics of our runs on social media, we don’t see the days when things just go pear-shaped. Plenty of days when there are tears and pain whether that be tiredness from not enough sleep the night before, upset stomach from something you ate, dehydration from running on the hot days, the biggest blisters you have ever seen or just that mental block which you need to just push through to get to the other side. I have a mantra that I say to myself and that is “Never give in”. On days like this, you might just have to walk for a while, eat a snack, or grab a coke or just get a hug from a mate at the next aid station. Do whatever you have to do to get through it. Some people call this the pain cave and when you come out the other side it makes it all worthwhile. 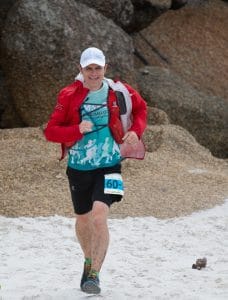 As I said not everything is rosy. I’ve been lucky that for many years I never had an injury. Although the last year has not been so kind. It started with a suspected plantar fasciitis injury which I picked up doing some gardening… too much pressure on the wrong part of my foot and this was a month out from running my second 100km race. I got it treated straight away and luckily I was able to run the race.

I also picked up a hip injury, a bit more serious which involved a visit to an ortho surgeon, luckily no surgery required. I got involved in a hip study with Latrobe University and undertook physio and strength work for 6 months which I’ve just finished and it has helped so much. I’ve had to curtail my running somewhat and I’ve learned what I can and cannot do. The worst thing was I couldn’t just run when I wanted to… out went long run Saturday and no events, I had to concentrate on my rehab to ensure I could run longer-term… although with COVID 19 I’m not missing much this year! Unfortunately, I’ve just picked up another foot injury, possible plantar fasciitis again. I’m taking some rest time out from running, donned the Lycra and I’m out on the bike for a few weeks to get my endorphin fix.

Running for me like so many people is my mental health fix. I never thought I would love running as much as I do and I get grumpy if I can’t get out for a run. I’ve been very lucky to have met some great friends along the journey and take part in so many great runs. My advice to people is to enjoy the journey but get those niggles and injuries checked and treated by the experts sooner than later, as they’ll get you out there running again!… #nevergivein

Ngan (Kim) Harwoodhttp://www.thefootcareclinic.com.au
Kim is the Senior Podiatrist, Director of The Footcare Clinic, a Mum to 3 beautiful kids and an Ultramarathoner in her spare time. She opened the clinic in 1998 and is grateful for the opportunity to provide a professional Podiatry service to the local community for more than 20 years. To learn more about Kim and the team, click HERE.

Our Online Booking Portal is the easiest, most convenient way to lock in the time you want.